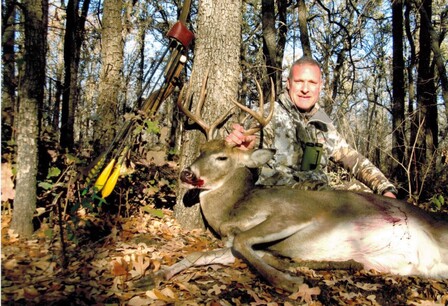 ​From an early age, I have had the inner drive for the  love of bowhunting.  Not coming from a bowhunting family, I would always search for like minded people with the same passion. My search led me to men such as Gene and Barry Wensel, Jay Massey, Doug Borland, Don Thomas, Roger Rothhaar, Jim Dougherty, Paul Brunner, Mark Viehweg. What I found with these men was that they are the PBS.

I’m Preston Lay from Jennings , OK. I have been a PBS member since 1994. I have been married to my wife Kim for 30 years, we have one son named Jesse. Jesse is grown and gone and we have replaced the kid with a dog. Koko is our chocolate lab and pretty much rules us and the house.   I’m a lieutenant with the Oklahoma Highway Patrol. I have been with the patrol for 21 years.  Retirement is on the horizon and I look forward to never missing a good hunting day.

I firmly believe that the PBS is not for everyone.  We were formed as a hunting group and should stay that way. Knowledge through experience was coined by Gene Wensel and wisdom and knowledge only come with experience.  The instant bowhunter has no place with us. The passion of the chase formed us and has kept us in tact through some tough times.  The appreciation of the preparation , the journey and the hunt . I believe we all know of a person  that has our passion and those people  should be recruited, even  sign them up to get them in and then hopefully they find a home and stay a member. I would challenge all out members to search out and find that person and pay their first years dues.

We recently had a member issue involving equipment. I’m not hung up on the tool. I’m hung up on fair chase and the preservation of bowhuntings traditional values.  If we identify ourselves as true ambassadors of bowhunting  and fair chase then we must draw lines in the sand. Sometimes those lines are blurry and offensive.  Aldo Leopold provided us with important messages days before he could have known of so called bowhunters being able to shoot at game up to 100 yards.  We must set the standard to keep the hunt in bowhunting.  Leopold stated “ Our tools for the pursuit of wildlife improve faster than we do, and sportsmanship is a voluntary limitation in the use of these armaments. It is aimed to augment the role of skill, and shrink the role of gadgets in the pursuit of wild things. Too often, what is offered as an aid to self-reliance, hardihood, woodcraft, or marksmanship, becomes instead a substitute for such skill.” We as PBS must not forget these precious words!

We have a lot of momentum with PBS. The regional hunts are a great opportunity for members to live out dreams of hunting afar. It’s so nice to have the networking available when planning a hunt.  Social media is an outreach to attract like minded  bowhunters, although I must admit resisting the use of this.  I often see on popular bowhunting website forums of hunters admiring Kevin Dill and asking him how he came to be such an adventure bowhunter. Kevin relays how he met other bowhunters  through the  PBS that led him to Alaska . Our membership is our most prized asset and many possibilities can be sought through our networking and interactions at gatherings.