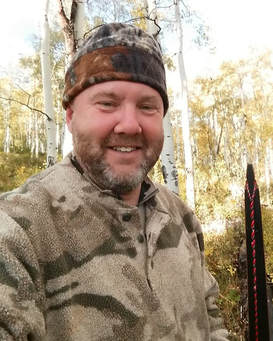 My name is Vance Henry and I reside in Thomson, GA, a small town located just west of Augusta, GA.  I’m married to my beautiful wife Khrista.  Between the two of us we have four teenage children, of which two are attending college.   We are an outdoor family.  In my professional life, I’m the General Manager of an Industrial and Commercial HVAC company, responsible for one of five locations.
I’ve been Bowhunting since I was fifteen years old.  Although I was unsuccessful in those early years, I never gave up.  Ultimately, I found success.  Somewhere around the mid 90’s I made the decision to quit carrying a firearm and start carrying a compound bow exclusively for big game.  And that’s the way it continued up until a few years ago.  Although I dabbled with traditional gear off and on for several years, I finally pulled the trigger and sold everything with a pulley and haven’t looked back since.  Today, my preferred weapon is a longbow but I’ll shoot anything made of wood.  I’m a huge advocate of understanding the game being pursued.  I take pride in constantly practicing the art of becoming a better woodsman.  And lastly, I’m a firm believer in close range Bowhunting. The closer the better.
In addition to being a proud member of PBS, I have been a member of the Pope and Young club since 2008, where I also serve as an official measurer.  And lastly, I am a member of the Traditional Bowhunters of Georgia and currently serve as the Vice President.